For a few weeks now I have owned both a Canon 1D Mark IV and an Olympus E-M1. And it is time to compare these 2 excellent cameras.
This comparison is about my experience switching from Canon to Olympus and it is in no way a scientific comparison of numbers and facts. I will go through the things I like (and don’t) and what I think really maters to me as a professional photographer.

The initial idea was to switch to a mirrorless system to gain portability by reducing weight and size. Read about it here.

As a surf photographer I rely on fast focus and the frames per second (fps) a camera can spit out so I don’t miss a the crucial shot of the action.

Both the Canon 1D mk IV and Olympus E-M1 do a solid 10fps when focus is set to ‘one shot’ or manual – meaning the camera only focuses for the first frame and then holds the focus at that point until you let go of the shutter. This works for shots where focus is set to manual or where the aperture is small enough that 90% of the frame is in focus (a wide angle lens at f/8 for example).
As a surf photographer this comes in handy in the water when using a fisheye lens in a underwater housing. Preset the aperture to minimum f/5.6 and focus at about 1.5m and set the shutter to a minimum of 1/1600sec to totally freeze the surfer on the wave and every single drop around him.

When it comes to focus tracking (aka AI focus) the Canon has the upper hand. With 8 (Canon) vs 6.5 fps  (Olympus) it is obvious the Canon is a faster camera.

I haven’t had the opportunity to fully test the tracking of the Olympus, but from what I’ve seen so far the keeping rate is about 70-80% – this depends very much on the lighting. On my 1D I have a safe 80-90% accuracy. So not much difference there.
In real life this would mean in an action shot of 2 seconds at 6.5 frames per second with the E-M1 I will have about 9.1 images (at 70% accurate following) that I can use compared to 12.8 (at 80% accurate following) images with the 1D at 8fps in the same situation. (This would have to be a racing car coming towards me, or a surfer surfing towards me and doing a turn on the wave.
If this will really have a big impact on the quality and quantity of usable images I will keep and edit for final use (printing, selling) I cannot say at this point. Only time will tell. 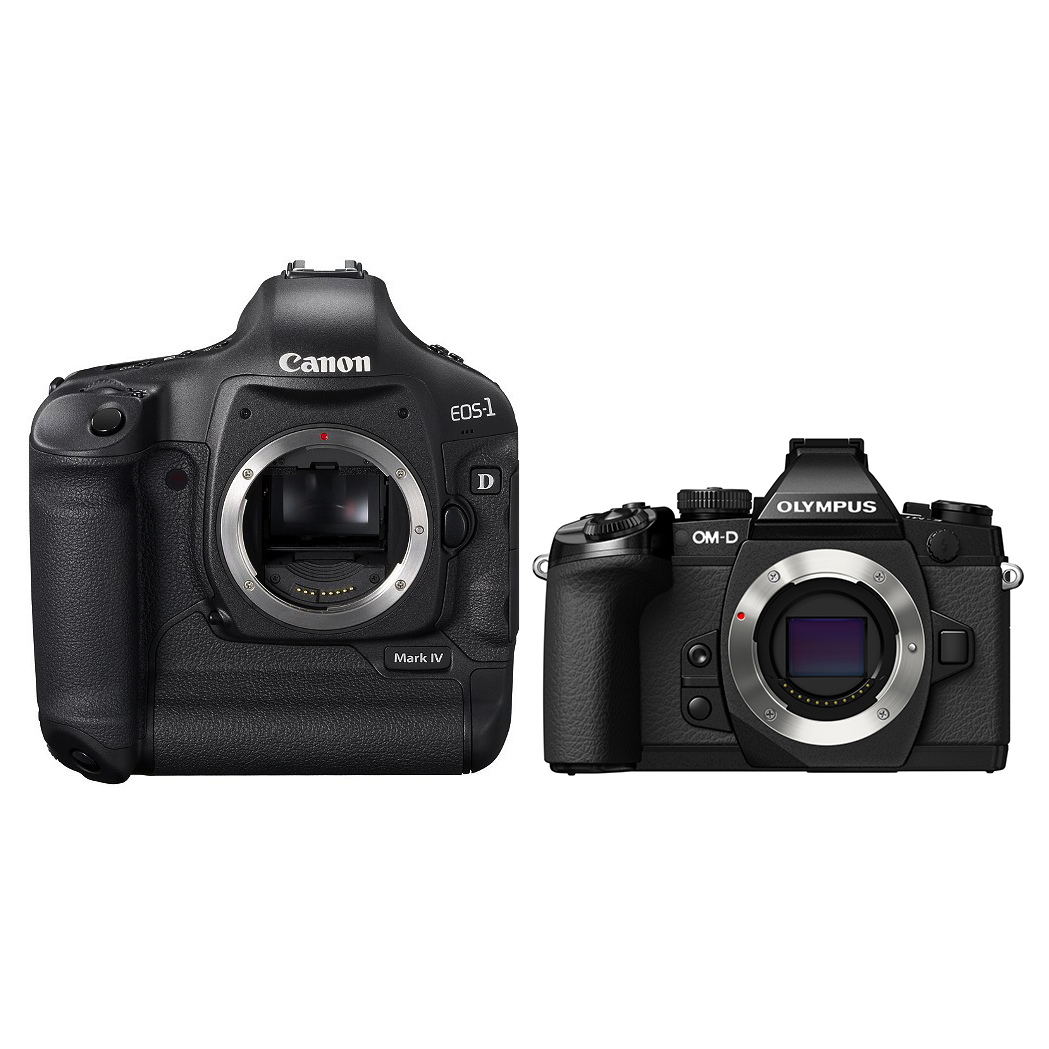 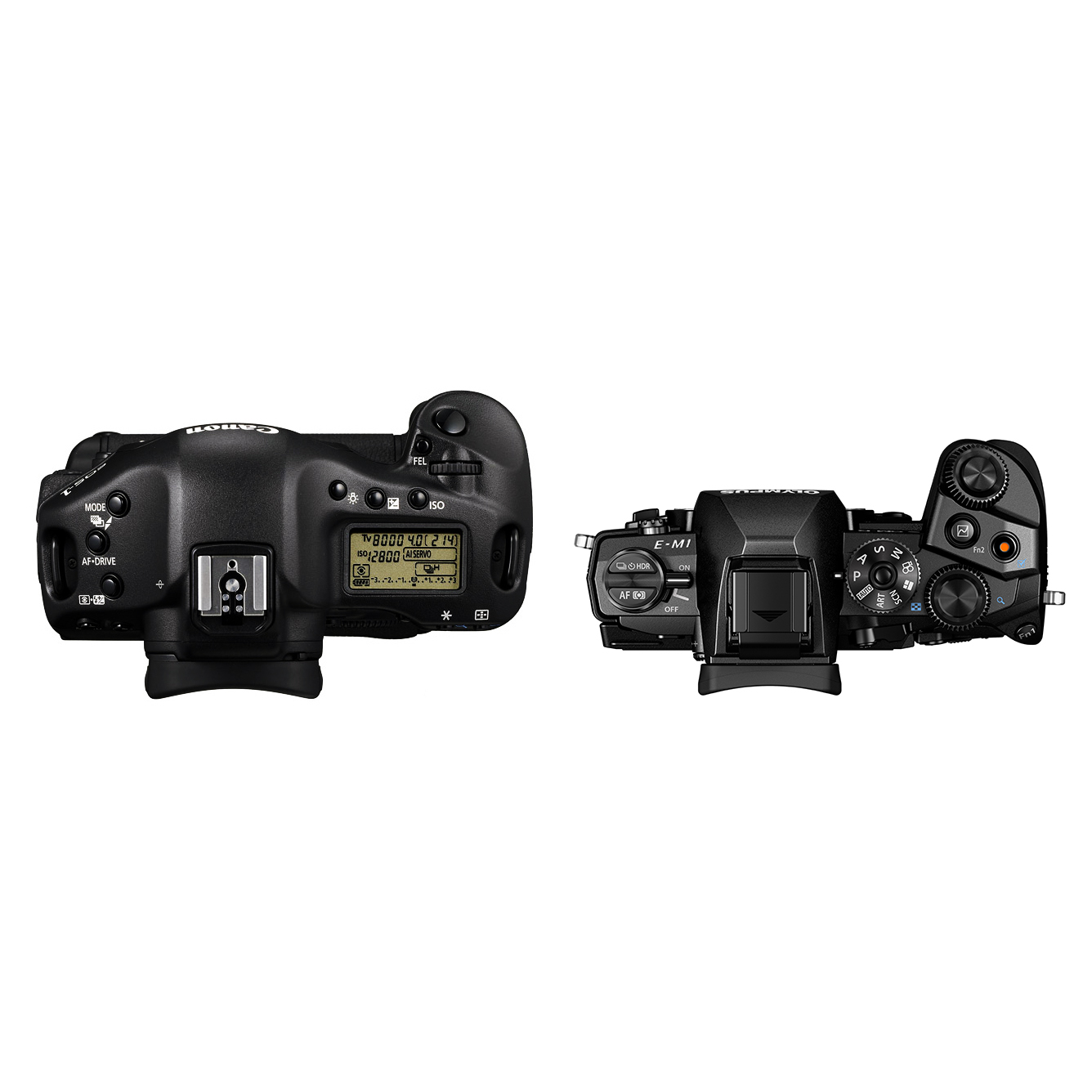 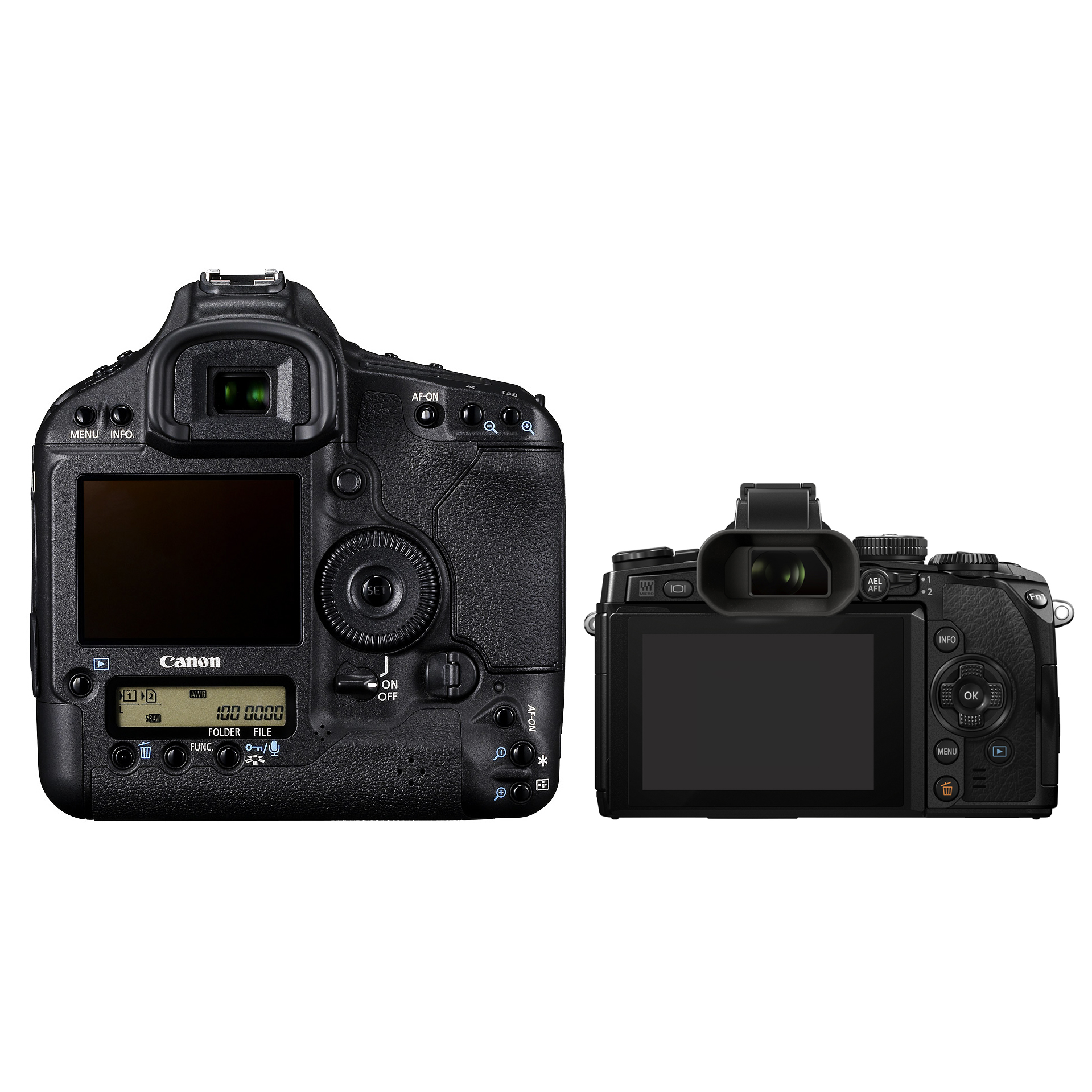 If we compare the numbers the 1D (released in September 2009) and the E-M1 (released in October 2013) every person on the street looking at both cameras would think the 1D is the better / more professional camera.

But both cameras share a lot of the same specs. (obviously there are a LOT more specs and numbers we could compare here… I picked the most relevant ones to me and the average shooter) 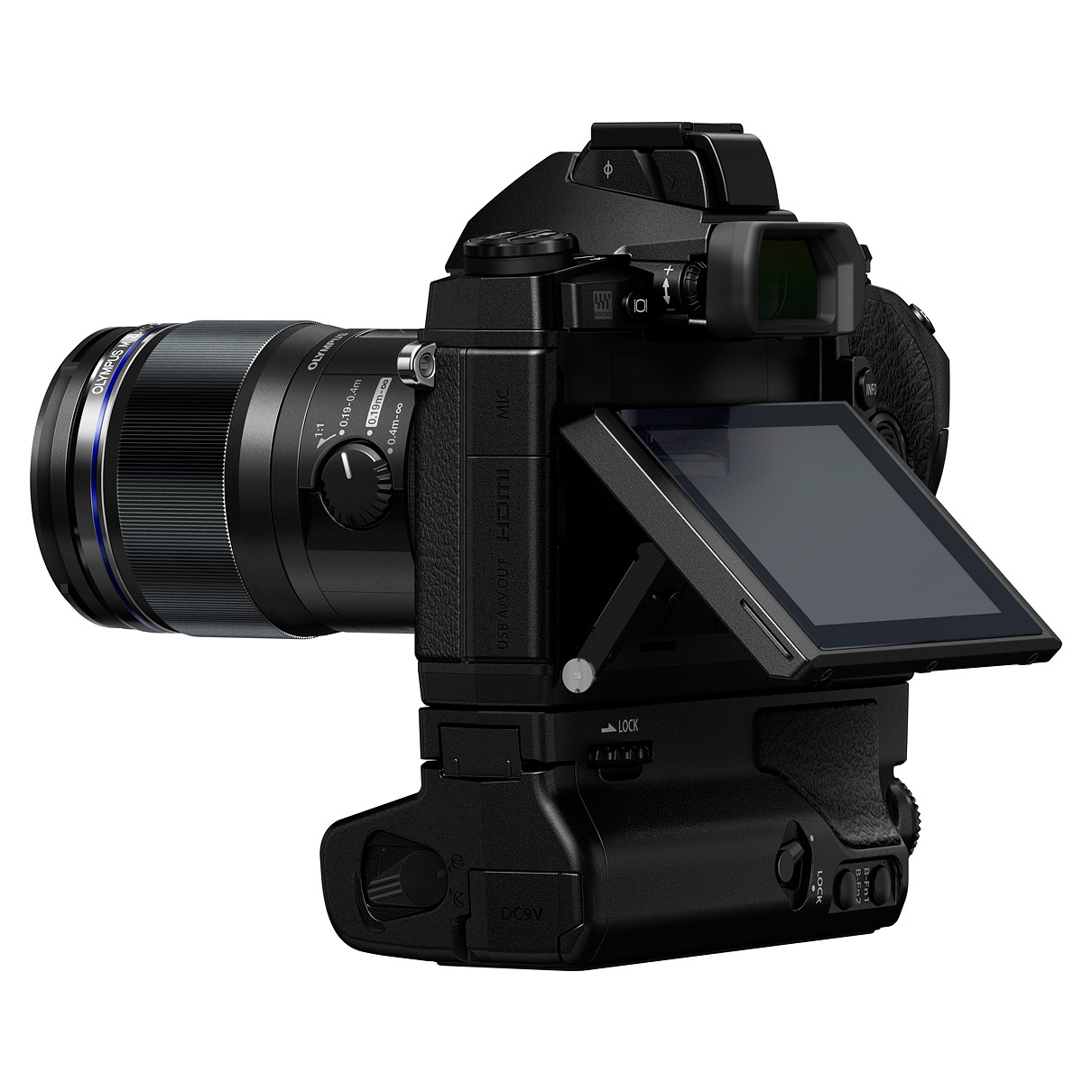 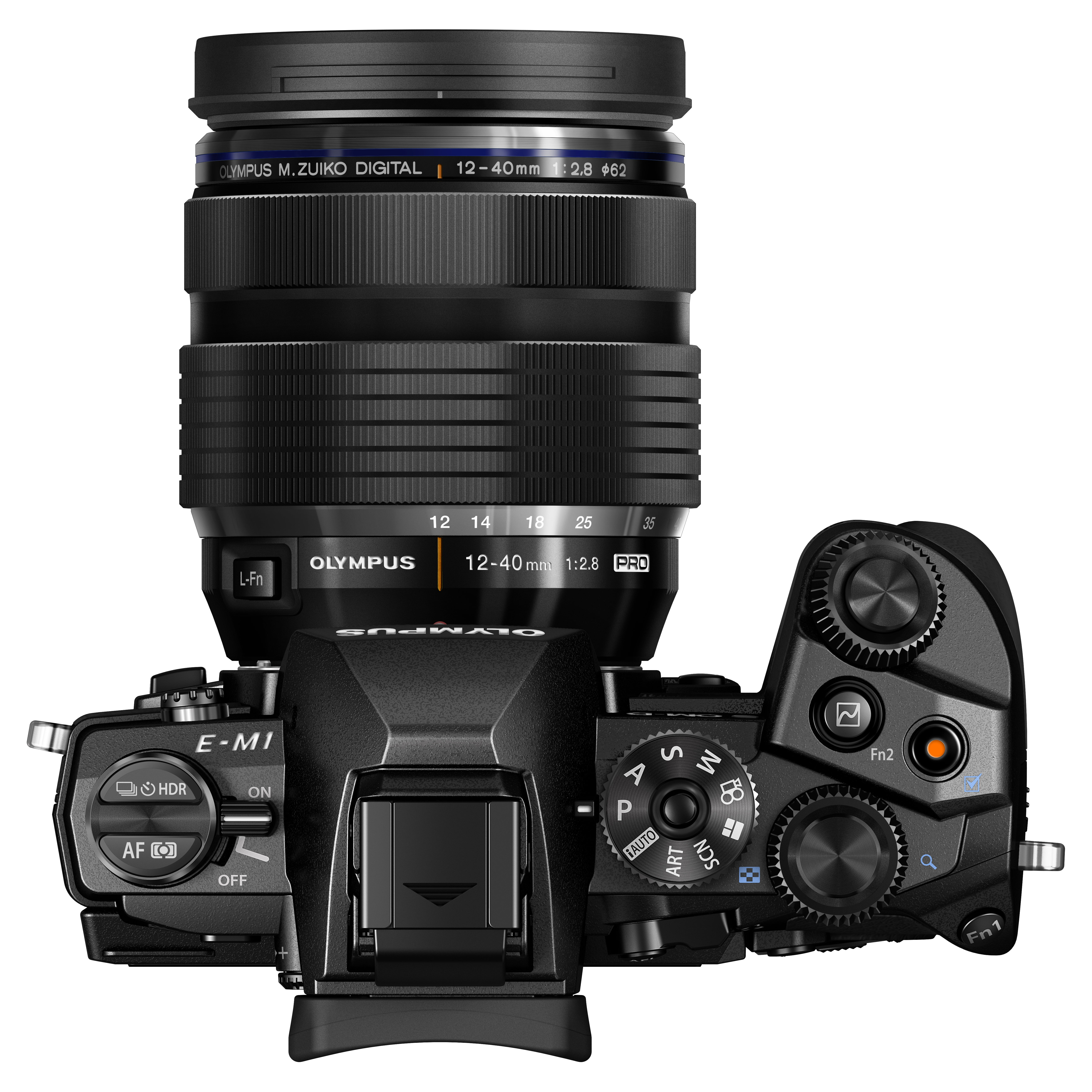 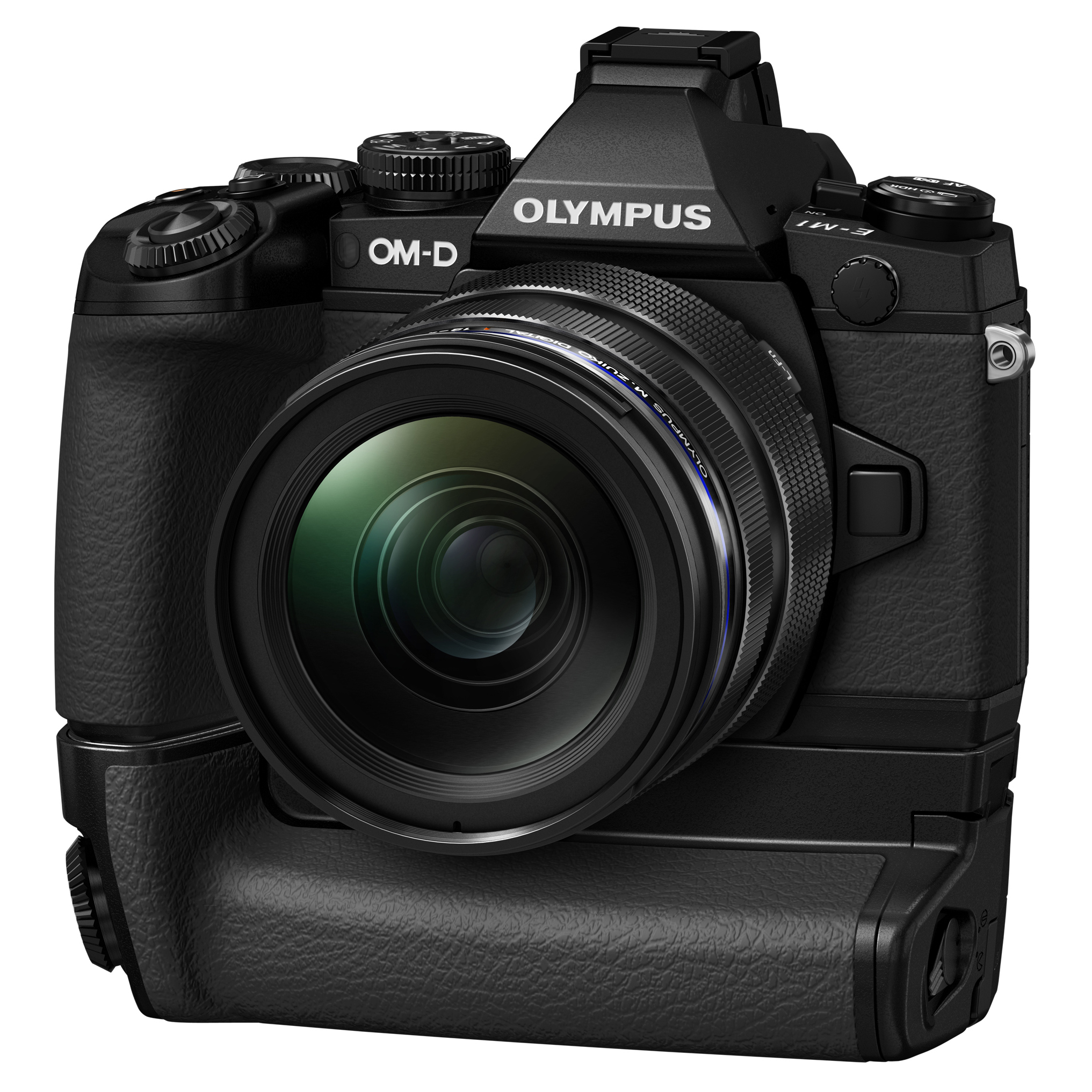 But numbers aren’t everything. The sensor on the E-M1 is 4 years newer. In technology that is a huge difference.
When it comes to ISO performance the 1D should be better. The sensor of the 1D is much bigger at the same resolution as the E-M1 and therefore the pixels are bigger and further apart creating a cleaner image. But to my surprise I find the Olympus to shoot much cleaner images up to ISO1000. After that the Canon takes the upper hand and the Olympus, while still producing absolutely great images, generates a little more noise than the 1D. But I find the noise less disturbing than on the 1D. It seems finer and smaller. 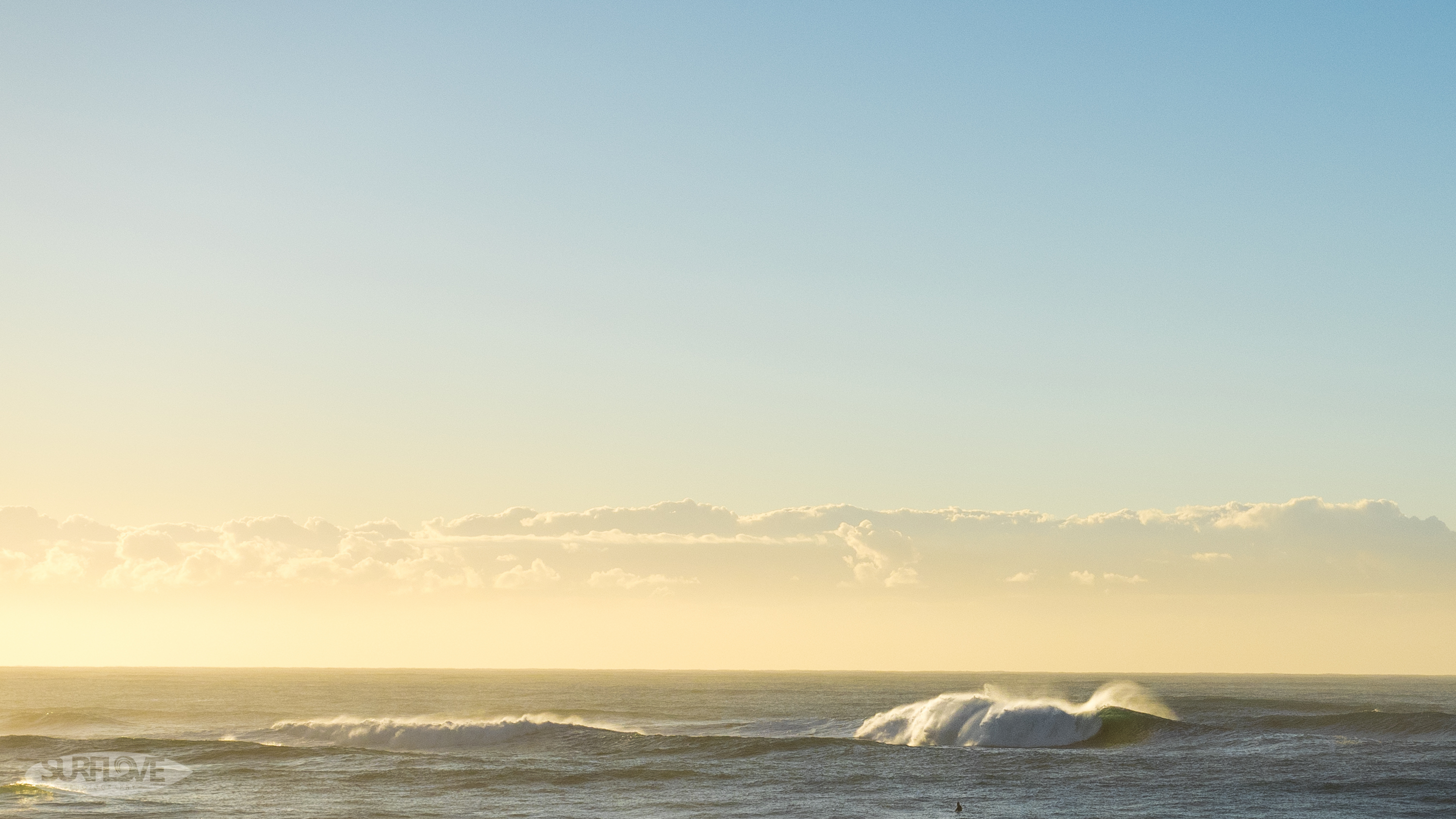 The Olympus is a good deal cheaper and so are the lenses for it.
My Canon gear (the lot) has a new value of about $15.000 where as the Olympus gear will cost about $8000 new. 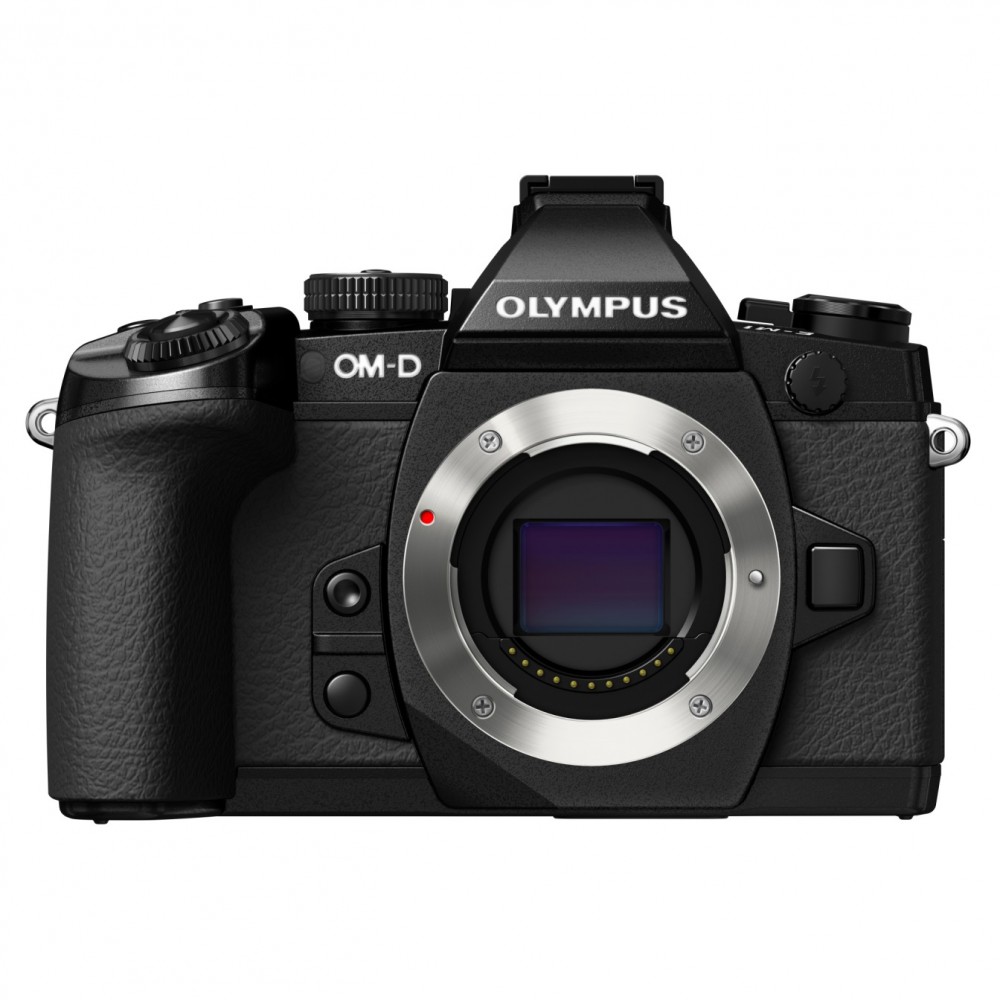 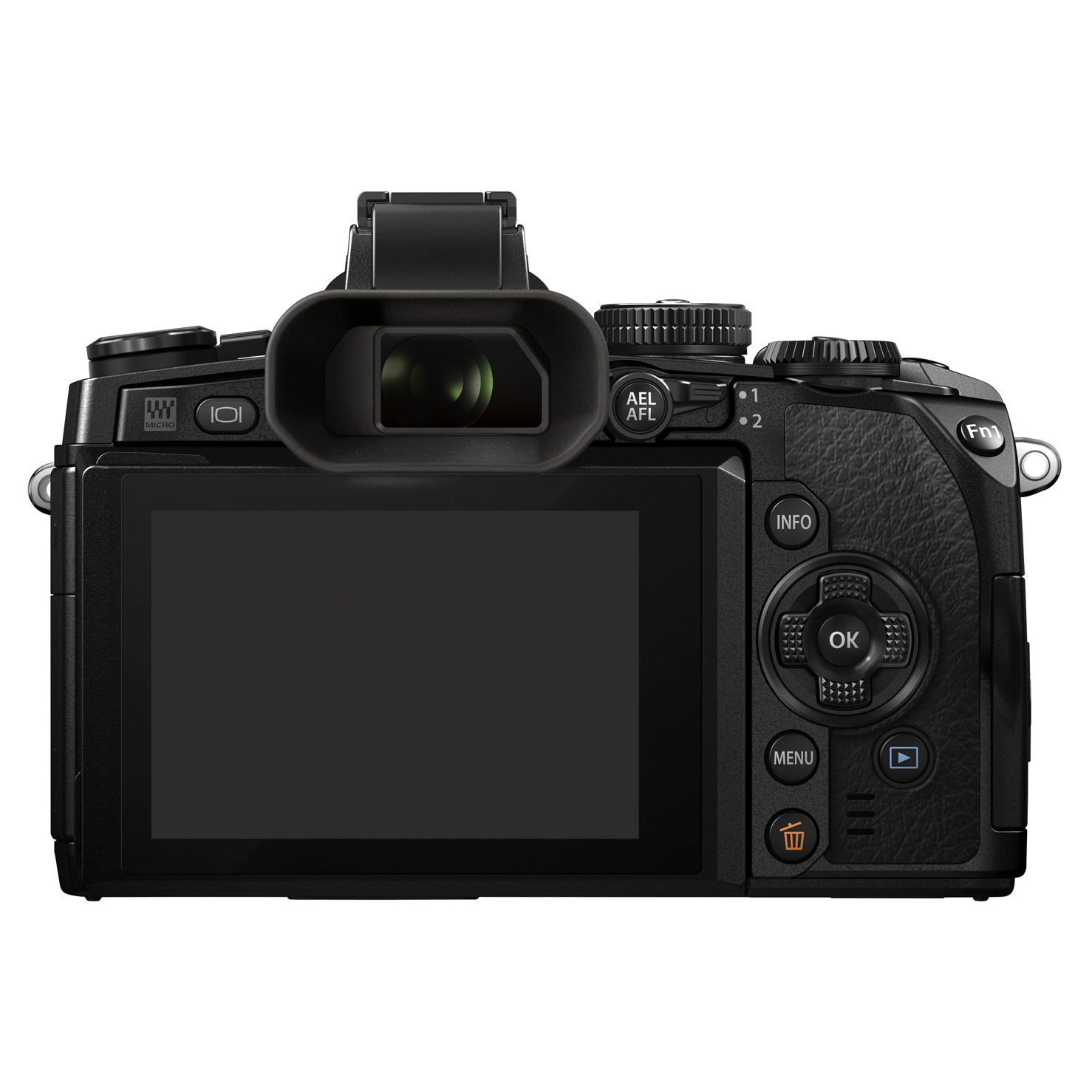 And because the sensor is much smaller there is much less glass needed to achieve the same focal lengths and apertures as in full frame lenses.
So not only the body is about 1/3 of the weight, also the lenses are at least 1/3 of the size and weight.
My old gear all combined weighed: 18kg  This included a Canon 1D, Canon 15mm f/2.8 fisheye, Canon 24-105mm f/4 L, Canon 300mm f/2.8, Aquatech CC-14 housing, Aquatech dome port and 70-200mm port and a 15″ MacBook Pro and some bits and pieces like batteries, chargers, cables, CF cards etc)
The equivalent Olympus gear:

Not only is it a lot lighter, it is also much smaller. My Goal is to stay under 10kg of camera and tech gear. The Macbook will be replaced by a 13″ MacBook pro soon – losing another 300g.
My goal is to carry only one bag with me when travelling. And with the Olympus gear I will actually have space for socks in that back too!

Both are excellent lenses and I definitely will own every single M.Zuiko pro lens in the future. They have proven themselves in weather sealing, build quality and sharpness.

And Olympus is doing a great job at completing the range: 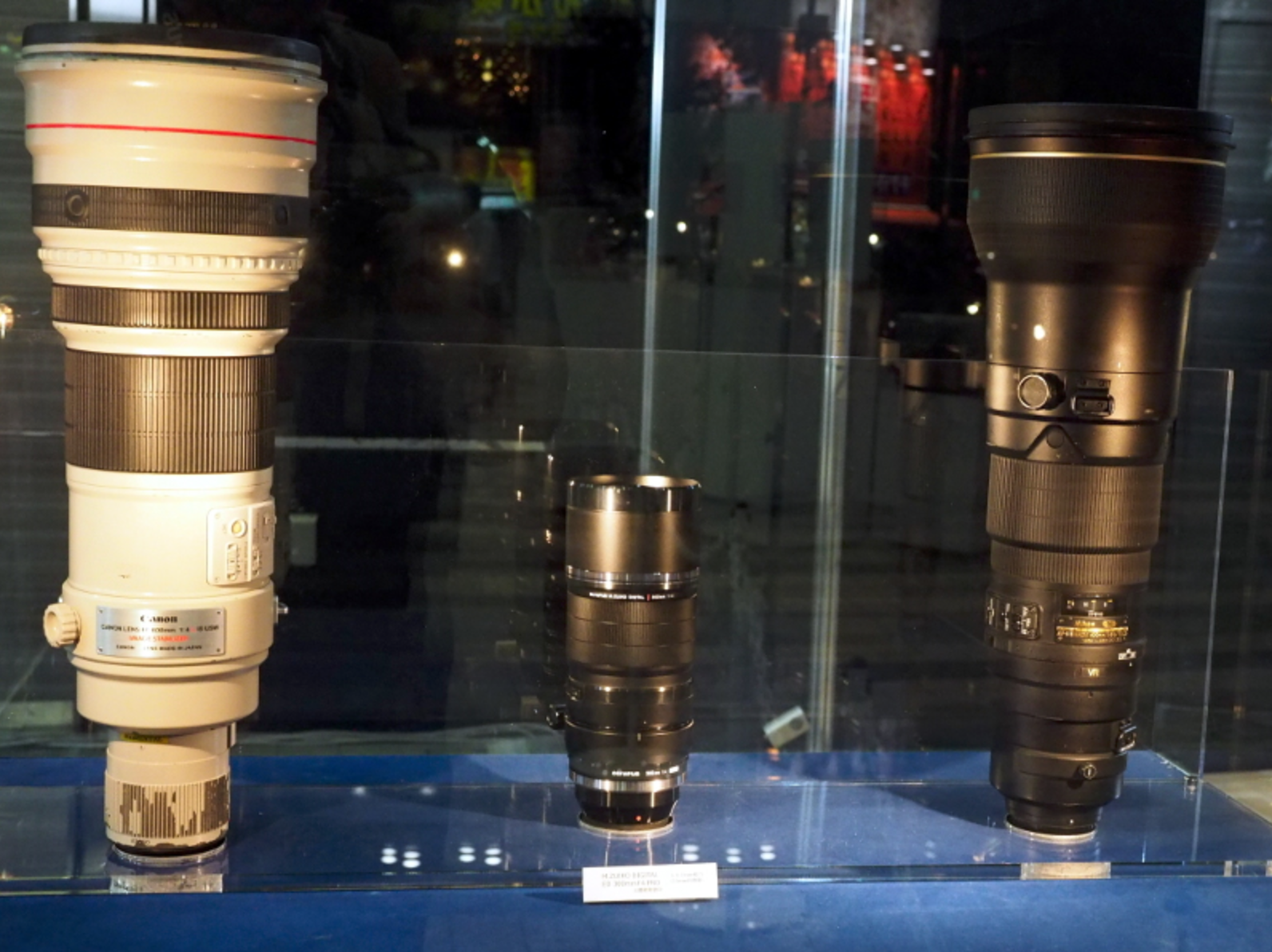 I love how packed the Olympus is with features. New things I now believe every modern camera should have.

– touch screen (great to pick a focus point on the fly)
– wifi (yes I know newer cameras have it – I love controlling my E-M1 with my iPhone and the Olympus app (name??) to capture landscapes and time lapses
– built in time lapse
– an EVF (yes I love it. Seeing what my image will look like overlaid with a ton of extra information is a GREAT thing!
– focus peaking (great to set my manual focus spot exactly where I want it before I head into the water)
– switching between auto and manual focus without touching the lens (this is great when I’m in the water and decide to shoot a wave from below the surface – you need auto focus for this to work out) – On my Canon and Aquatech housing this was a decision I had to make before I even went into the water. Manual focus and shoot surfers or auto focus and shoot under water and maybe some blurry shots above the surface? This is also great if I want to correct my manual focus point distance once I’m in the water. I set it to auto focus again, focus on a new point and then switch back to manual focus again. Really really useful!
– Live Composition Mode (more on this soon)

– the battery life and indicator. Olympus please give us a % of remaining battery life. The only thing there is, a little flashing icon which becomes red once the battery is about to die.
– the fact that I can’t look at my images while the camera is writing to the SD card. YES I need this feature when I’m shooting a burst and want to do a quick check if I got the shot – waiting for my camera is very annoying in this situation and I have actually missed shots because of this. I will need a faster SD card to minimise this problem. To my knowledge the E-M1 writes at about 60MB/s – so a 100MB/s SD card will do the job.
– the Olympus is the flagship camera and the way Olympus is marketing it it’s aiming for the semi to professional photographers – but why is the camera equipped with ART filters? Really we don’t need that! I’ve switched it off (thank god you can) and it doesn’t bother me anymore… but I just can’t get my head around it… sometimes some features are too much and the Art filters are.

The Olympus is the better camera for me. At first it took getting used to, having a much smaller camera in hand is a great thing! You are less recognisable as a photographer and people don’t notice you taking photos. Even if you have a longer lens on the camera, it still is small. Then there is the electronic viewfinder, that also took a few days getting used to, but by now I find it strange looking through the 1D viewfinder. I find myself taking more time to compose better images. This means I shoot less, but find that i keep more of the images.
The tilting screen is a great feature too. Holding the camera right on ground level and shooting an image is no problem and I find myself getting lower down to shoot more interesting angles more often now.

The performance in the housing in the waves is my next concern. I’m actually very confident that it will be perfectly fine, but only time will tell…

By the end of this I will have sold  approximately $11 000 of used Canon and Aquatech gear and now own new gear and actually saved some money but I’ve lost the weight and size and gained portability.

Keep an eye out for first surf photos taken with the housing and further reviews of lenses and experiences with the new camera.

If you are keen to get the Olympus E-M1 THIS is the place to go to! Absolutely the best prices – I got all my gear from Diamond cameras and the service was unbeatable! (I’m not paid to say this, I just like recommending great businesses)
If you are looking to pre-order the M.Zuiko 40-150mm f/2.8 they are probably the best place to go to too!

I received the PT-EP11 underwater housing over the weekend and will be writing an extensive review about it in the coming days. So stay tuned for some news.