My packlist for the Australian Open Of Surfing 2015

The past few days have been quite a challenge for me and my gear.

3 reasons why the AOS was a challenging event to shoot:

So how did it all work out? What gear did I use and why?

Firstly: It worked out better than I expected and has even more boosted my confidence in the Olympus mirrorless compact camera system. 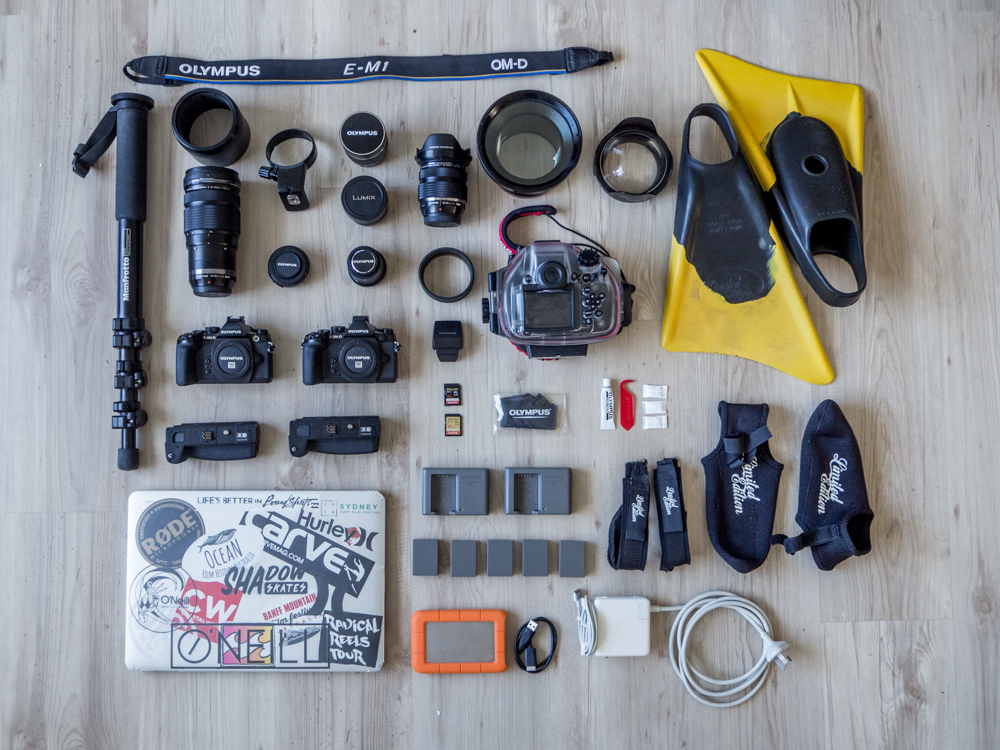 All the gear I used to cover the 9 day surfing event at Manly Beach. The Australian Open Of Surfing

The big problem when shooting a surfing event like this is, that not only can you focus on the action, it’s also about documenting the athletes in their environment. You need to document everything by getting a full range of shots: close ups, head shots, athletes warming up and getting ready for their heats and of course the surfing itself. For a surfing event this essentially means that you need a focal range from 20-500mm, fast auto focus, low light capability, high frame rates and great sharpness – and as we all know, there is no such ‘all-in-one’ lens/camera combo. It comes down to breaking your setup into 2.

I decided to use 2 Olympus E-M1 bodies and with the above mentioned range of lenses I was perfectly equipped for the event.

One of the E-M1 bodies was used in combination with the M.Zuiko 40-150mm f/2.8 + MC-14 x.1.4 Tele Converter to shoot the surfing action from shore.
The other body was mostly used to capture the rest. I mostly equipped this body with the 75mm f/1.8 for close up headshot to capture the emotions, without getting too close or the 45mm f/1.8 to capture full body shots at a very low aperture to make the athletes stand out from the scene.

After a few days I noticed that the 210mm (420mm full frame equivalent) of the M.Zuiko 40-150mm + x1.4 TC at 150mm were not quite enough to capture the surfing. I ended up cropping a lot of the images to get close in on the action. This was also necessary because the surf was rather small and to show the power and style of surfers on small waves it is crucial to crop the shot tightly.
Later on in the week the surf picked up and I found that the above lens combination was a little too short to capture the action. I was still cropping my images to get close enough into the action – this time it was not because I needed to get close, but because bigger waves were breaking further out in the ocean.

Nonetheless the excellent focus tracking & 16MP of the E-M1 did the job nicely and even cropped shots were no problem. Image requirements for publishing on the official event website were 2500px on the long edge – so with an initial 4608×3456 pixels there was a lot of room to play with and I could crop 50% in without having to worry about going over 100%.

The big big positive experience about this setup?

I could fit ALL my gear into my camera bag! There was NO other photographer out there who could have done this – especially not if they were shooting with the same range of lenses: 16mm f/3.5 (fisheye) (full frame equivalent) all the way up to 420mm f/4 (full frame equivalent) and there were A LOT of them out there carrying heavy expensive white lenses on big heavy tripods to support them. Here my all-in-one bag: 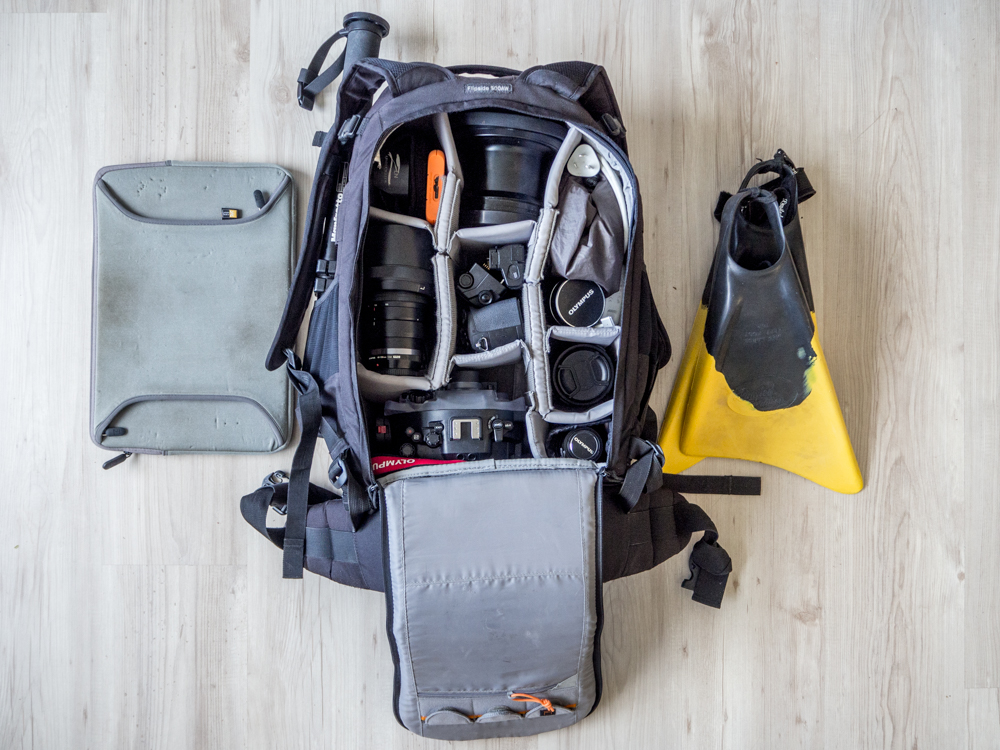 everything fits into one bag 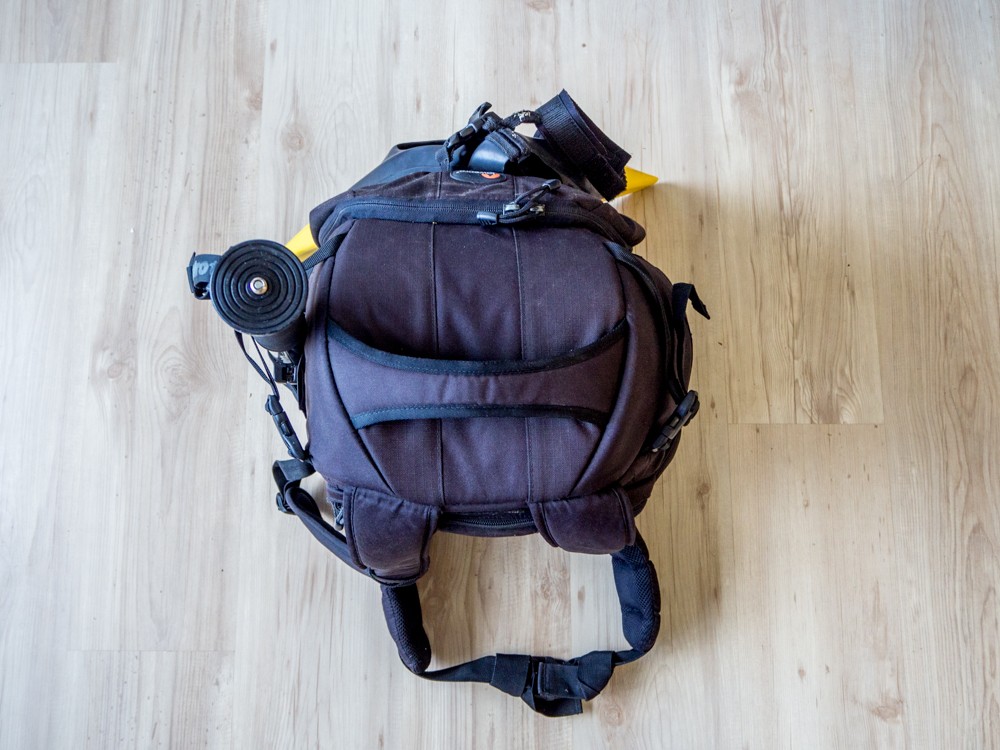 The packed bag. Ready to go.

Total weight of this full bag of gear? ±12Kg

Not only is a small and light bag a great thing, but not having to carry a 15Kg camera and lens around on the beach meant that I could carry both cameras around with me without any problem. I could shoot the surf and then easily rush over to the athletes area to capture the portrait shots with my second body while the first one (with a 420mm f/4 full frame equivalent lens) was just hanging off my shoulder. Again, something that is absolutely impossible for a DSLR setup of the same focal range.

Another great feature is the small PT-EP11 housing. I swam out most sunrises to capture the surfers warming up seen from the water. I mostly used the M.Zuiko 75mm f/1.8 (150mm f/1.8 full frame equivalent) in the housing. Firstly for it’s weight and size and secondly because I could shoot at f/1.8 – allowing for fast shutter speeds at low ISO in low light conditions. This lens has become my absolute favourite lens to shoot from the water, it’s amazingly sharp, the focus work great and it’s light. It also allows me to sit further back and not get in the way of competing athletes. 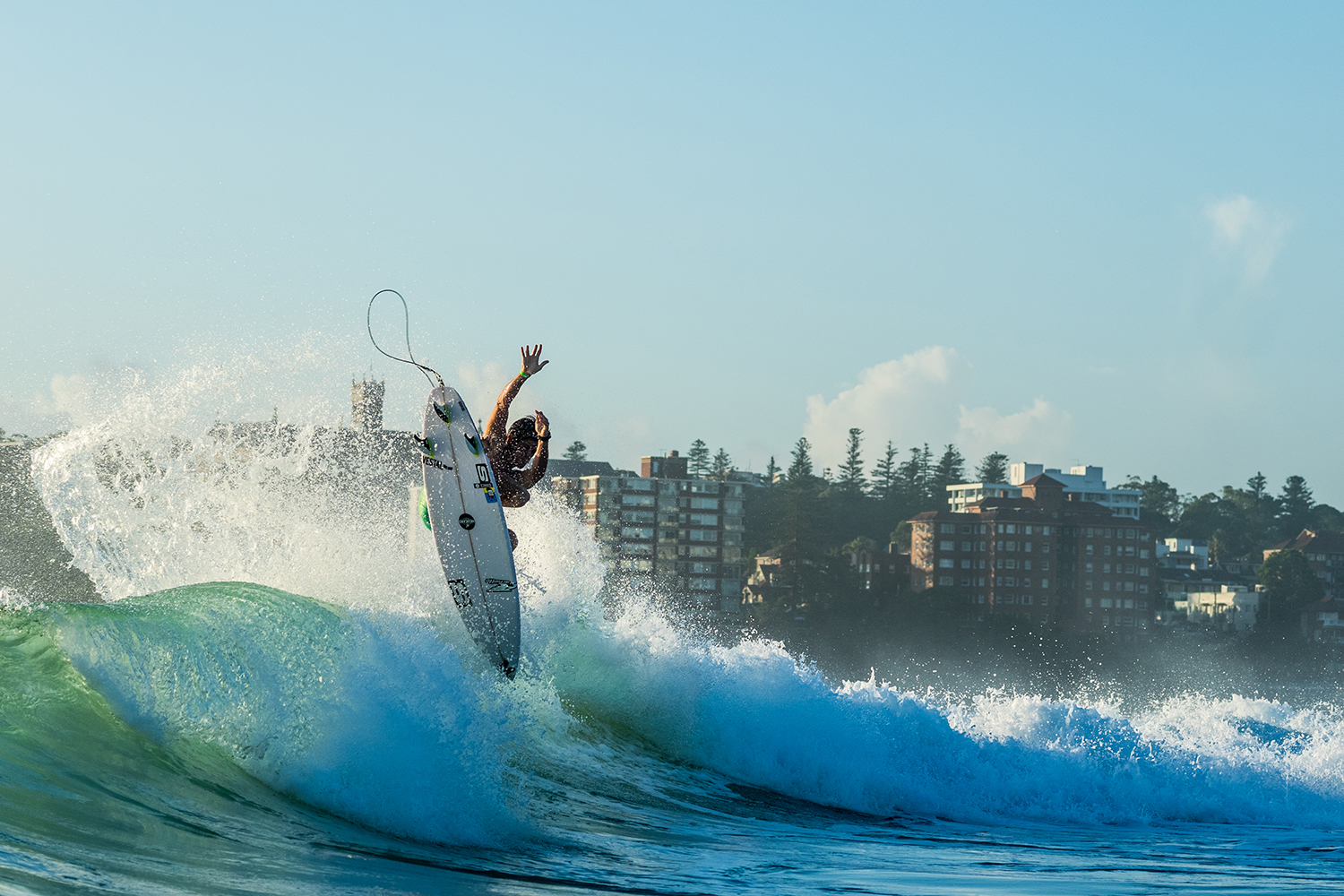 The Olympus Share app on my phone and the built in WiFi feature on the E-M1 allowed me to attach the camera with the Panasonic 8mm f/3.5 fisheye to the end of the monopod and remotely trigger the camera while I was actually seeing what the camera was seeing on my phone – from a birds-eye perspective. 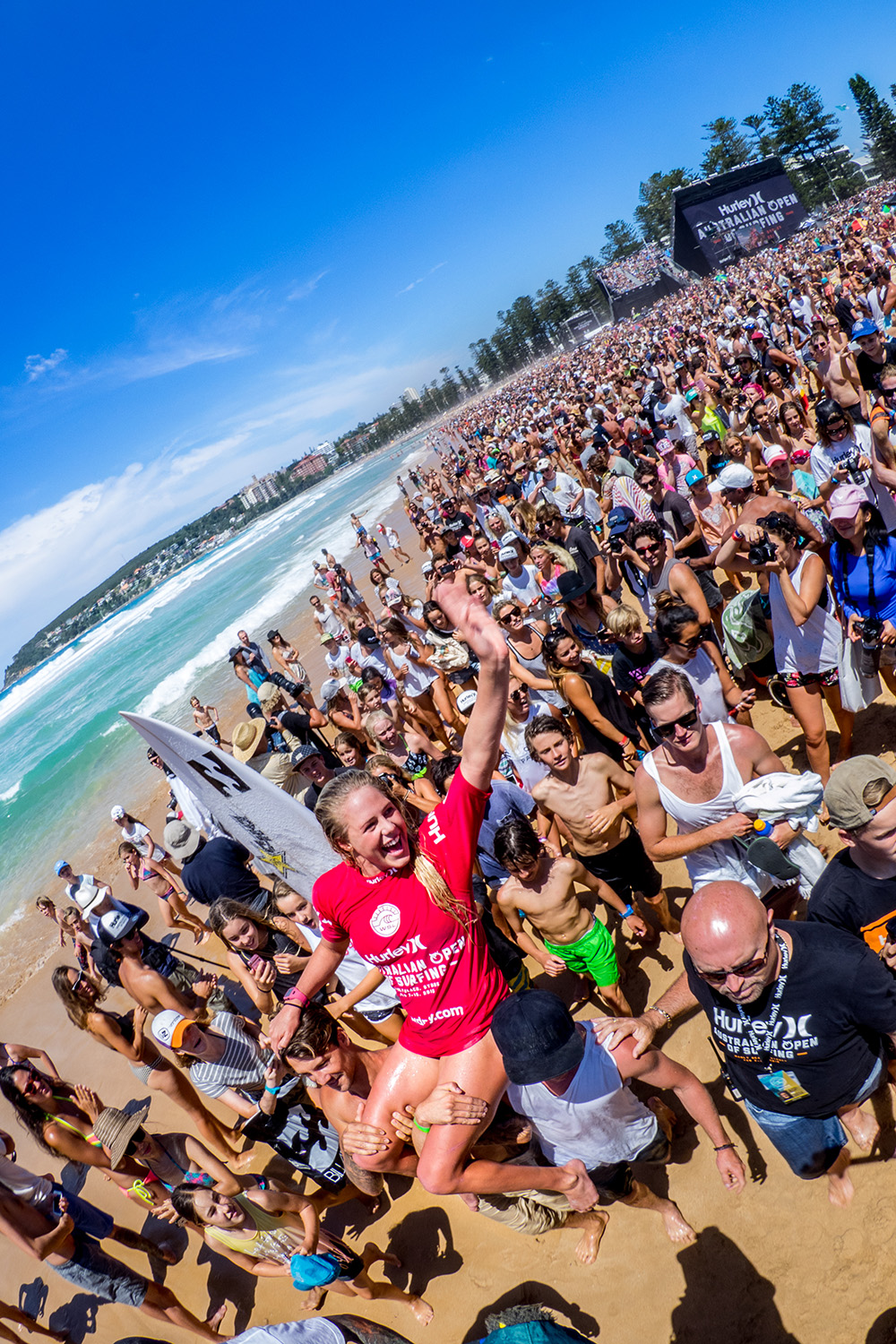 As mentioned before. The lack of range forced me to crop images – an OK compromise, but not the perfect solution. Luckily I know the 300mm f/4 (600mm full frame equivalent) is on the roadmap for 2015 and it being compatible with the x1.4 extender should give me all the reach I could ever want to capture surf (that would be 840mm f/5.6 full frame equivalent).

I also would like to see Olympus implement a feature to rate RAW files in camera. Shooting surf means a lot of sequences with mostly 1-2 images that remain per sequence. Shooting a surfing competition means a lot of sequences… and a lot of images to work through on the computer. It would GREATLY speed up the processing if I could give an image a star rating (preferably by pushing one button on the body that I assigned to do so). I spent a few hours before the competition organising and preparing Adobe Lightroom for the task and I believe I had a very effective processing method worked out that helped me get through about 600-800 images in less than 30min.

The tracking works great and once mastered it can absolutely compete with Canon (or Nikon) – the only thing I would like to see is a smaller tracking point so I can point it at exactly what I intent it to focus on as I did sometimes notice that the tracking was actually following the wave in front of the actual one I was trying to focus on – a longer zoom lens would have made the framing easier and consequently the tracking too of course.

I know I mentioned a few things in the above point that I’d like to see fixed / changed – but none of those points are points that I can’t see Olympus not fixing in the coming months / year and knowing this is exactly why I chose to use Olympus.

I’d like to thank Spencer, my friend and assistant for his help in covering the event and of course the guys from IMG who managed the whole Hurley Australian Open Of Surfing event and got me to be part of their team.

Olympus listens to feedback and as an end user I feel that can be part of and help leading this technology into the right direction.